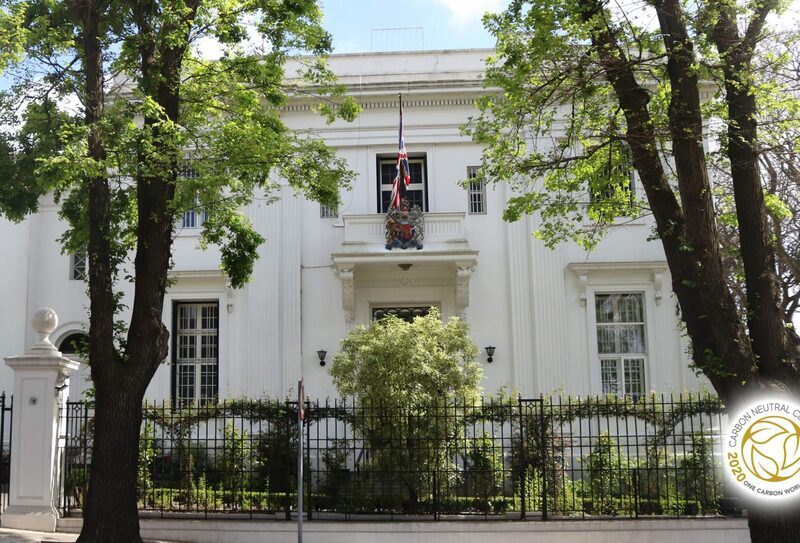 The British Embassy in Uruguay’s capital Montevideo has become the first embassy in the world to obtain international Carbon Neutral certification for embracing the United Nations “Climate Neutral Now” initiative.

The 2015 initiative was launched to encourage everyone in society to take action to help achieve a zero emissions world by 2050, as enshrined in the Paris Agreement.

In order to achieve zero emissions, three steps have to be followed; namely  measuring   carbon emissions,  reducing them as much as possible, and compensating where there are any emissions that cannot be avoided.

All electricity, heating and water emissions from both the Embassy and the British residence were measured in 2019. An action plan was drawn up, and measures were taken to reduce emissions. Where identified emissions were not possible to avoid the Embassy, through OCW, has compensated for its remaining emissions.

Ambassador Faye O’Connor said “Every action counts. I am very proud that my team has achieved the success of being the first embassy worldwide to reach net zero emissions and am very grateful to One Carbon World for their support. But it is important to do more – my ambition is to try to be the first embassy to truly achieve zero emissions. This implies that every year we are going to adopt new measures to compensate less. That is why I am looking for an electric car for personal use, and we are going to use official electric cars as soon as possible. We are also going to install more solar panels to heat my residence and the Embassy using renewable energy.”

For several years, the Embassy has been working to reduce its environmental impact. Some of the measures adopted include the installation and use of solar panels to heat water used in the residence, the elimination of single-use plastics, recycling, the creation of an organic garden and window isolation to avoid air leakage.

Carbon credits, obtained through OCW, support a Uruguayan reforestation project of 22,000 hectares of trees,, called Guanaré, in the department of Treinta y Tres, which is verified by the Rainforest Alliance.

Guanaré has both environmental and social benefits, including a program in which students and members of the community are taught to care for the native flora and fauna as well as to protect the environment. The project has created more than 260 jobs, supported more than 70 farmers, contributed to the reduction of poverty in rural areas, and provided materials and human resources to rural schools.

Andrew Bowen, CEO of One Carbon World, said, “As the first Embassy in the world to achieve this, we are confident that this action will inspire other embassies to take action to become carbon neutral in the near future.”

Niclas Svenningsen, Manager for the Global Climate Action, UN Climate Change, said, “Embassies, being the face and voice of governments in other countries, have good reasons to showcase the best of what they represent and inspire others by their own actions. With climate change being the defining issue for the future of the planet, showing leadership in taking climate action in all aspects of work is essential. For this reason, we are glad to count the British Embassy in Montevideo, Uruguay, as a participant in our Climate Neutral Now initiative and look forward to continued participation as we all strive to achieve a net zero society.”

The embassy has carried out several environmental campaigns promoted by the British government and, in particular, by the Foreign, Commonwealth and Development Office (FCDO). These include the Beyond Plastic campaign, which aimed to reduce the use of non-reusable plastics, as well as a joint campaign with Uruguay’s Ministry of Housing, Land Planning and Environment of Uruguay to promote the use of reusable shopping bags.

The Ambassador highlighted that a key factor in the Embassy further reduction of emissions is in large part thanks to Uruguay’s investment in the use of renewable energy. “Last year 98% of Uruguay’s electricity came from renewable sources. This is impressive. My government congratulates Uruguay for its leadership and for the creation of the Ministry of Environment to promote increasingly green public policies. It is crucial that we arrive at the United Nations climate change conference in Glasgow in 2021 showing that we can implement the changes necessary to ensure the safety and prosperity of future generations. I am fully committed to helping and supporting our Uruguayan stakeholders in further accelerating their transition to a more sustainable and modern economy,” said Ambassador O’Connor.