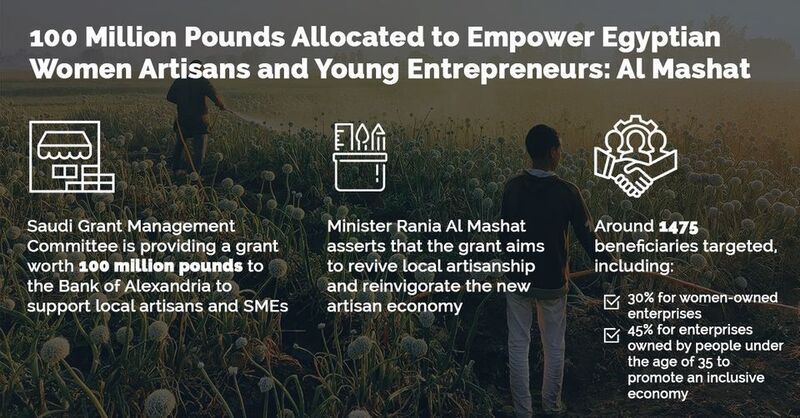 Egyptian Minister of International Cooperation Dr. Rania Mashat announced that the Saudi Grant Management Committee is providing a grant worth 100 million pounds to the Bank of Alexandria to support the digitalization of small and medium enterprises and back local Egyptian artisans and craftsmen.

This came during the committee’s 26th meeting that took place recently under Mrs. Ghadeer Hegazy, Assistant Minister of International Cooperation, and Hasan Al-Attas, Director-General of operation at the Saudi Fund for Development, as well as representatives of Bank of Alexandria.

The grant comes under the Ministry of International Cooperation’s Global Partnerships Narrative, which is defined by the triple Ps: people at the core, projects in action, and purpose as the driver.

Under people at the core, the minister asserted that the grant aims to revive local artisanship and reinvigorate the new artisan economy, which has become as increasingly important in the face of high global demand for high-quality, artisanal products that are also produced in a sustainable way.

The grant also aims to strengthen the financing mechanisms for small, medium and micro-enterprises, as they are vital for job creation and promoting the talents and potentials of Egypt youth.

During the meeting, representatives of the Bank of Alexandria made a presentation on the financing programs that the bank targets in 26 governorates, including Cairo, Alexandria and governorates in Upper Egypt.

The bank estimates that there will be around 1475 beneficiaries, including 30% for women-owned enterprises, and 45% for enterprises owned by people under the age of 35 to promote an inclusive economy.

Under projects in action, Mashat praised the fruitful cooperation between Egypt and the Kingdom of Saudi Arabia, which has resulted in several development cooperation programs, including grants for small and medium enterprises, development projects for the Sinai Peninsula and other programs that reflect positively on Egypt’s development.

It is worth mentioning that the Saudi Arabia Grant Management Committee has funded 2,180 projects so far in 27 governorates, which have contributed to the creation of about 12,000 job opportunities under the $200 million grant deal which was signed in 2016.

Committed to achieving the global goals, the project achieves the following targets; Goal 8 for decent work and economic growth through promoting job creation and access to financial services, Goal 5 for gender equality, Goal 10 for reduced inequalities, and Goal 17 for partnerships for the goals.