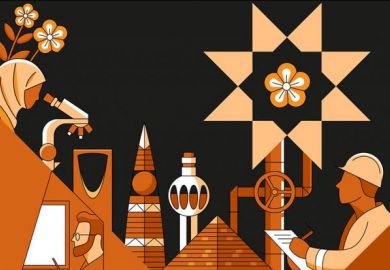 Egypt is the best represented of all 15 Arab countries on the 2022 Times University Rankings as it has 34  universities featured in the rankings and more institutions among the top 50 than Saudi Arabia, which has a similar number of universities overall.

The country did well on citations, scoring 71.3, its highest average score in the main pillars. That was helped, no doubt, by near-perfect performances for citations at Kafrelsheikh University and Suez University.

However, the country fared less well in the international outlook category – scoring just 45.3.

The presence of Lebanon and Egypt so high in the table overall is a testament to their “long history and legacy of higher education in the Arab world”, Christopher Davidson, a fellow of the European Centre for International Affairs, said.

The Times Higher Education World University Rankings are the only global performance tables that judge research-intensive universities across all their core missions: teaching, research, knowledge transfer and international outlook.

The methodology behind the Arab University Rankings is based on the same comprehensive and trusted framework as the global table, but some important adjustments have been made and some new metrics have been included to reflect the features of universities in the Arab region.

The Times Ranking use 16 carefully calibrated performance indicators (listed below). The performance indicators are grouped into five areas: Teaching (the learning environment); Research (volume, income and reputation); Citations (research influence); International outlook (staff, students and research); and Society (knowledge transfer and impact).region’s countries, it is not surprising that the citation score is the most inconsistent, said Davidson.

However, he continues, citations are one area likely to see rapid improvement in the coming years – particularly in Saudi Arabia.

Leading universities in the Western world are typically viewed as part of a research academy, says Davidson.

“What’s traditionally been the case in the Arab world is that higher education institutions have been very closely tied to what the job market and broader society expects of them. In the Arab world, graduates are usually trained for the labour market or a particular part of society.”

Sabry says there could be many reasons behind such inconsistency, including the impact of Covid-19, when priorities shifted to support research related to the pandemic and vaccines, which left Arab countries lagging behind in other areas.

“The economic effect of Covid also negatively affected the funding of other research fields, and we are still feeling such effects. This may have caused the inconsistent results of citation scores, and we can expect to see the same next year as well,” she says.

Given so many differences between the countries in terms of their results, each of them should look at its situation individually to make improvements, she argues.

“I think those with the lowest ranking should prioritise teaching and research, but those in higher positions need to work on citations and society,” she says.

There are 169 universities in this year’s Arab rankings, across 15 countries. The ranking is based on THE’s World University Rankings but adapts the methodology slightly to suit the unique region.

According to Davidson, the THE rankings provide a “much-needed signal” to the nations performing well that they have made the right decisions and investment choices in recent years.