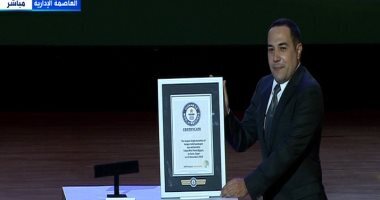 Ahmed Makled, the CEO of the Coordinating Office of Guinness Book of Records, handed over two certificates to Tahya Misr Fund during a ceremony marking the launch of the largest food campaign in the world as well as the largest campaign for donating chickens.

The campaign is expected to get a third certificate with the largest international humanitarian assistance campaign which is due to be spearheaded by the fund soon.

Prime Minister Moustafa Madbouli attended the ceremony which was organized by the fund to mark the event.

The humanitarian campaign was launched in line with directives of President Abdel Fattah El Sisi to intensify the fund’s activities to promote economic development and social protection, especially backing most needy families.

The one-billion-pound fund is working in tandem with the Ministry of Social Solidarity.

The premier inspected the humanitarian convoy which included 199 jumbo trucks and 271 trailers carrying one million food packages in addition to 2000 tons of chickens.

The fund managed over the past period to secure houses for over 10,000 families to protect them from rains.