The concept of development and international issues was brought to limelight in April 1968 when Aurelio Peccei, a successful Italian industrialist, Alexander King, an eminent Scottish scientist, and David Rockefeller, a US banker and philanthropist, established Accademia dei Lincei or Club of Rome to be a non-governmental research center for addressing development issues, including overpopulation and global warming.

Two decades later particularly in 1983  Gro Harlem Brundtland, the then Norwegian prime minister, established the World Commission on Environment and Development (WCED), which is also known as the Brundtland Commission. This commission played a pivotal role in launching the United Nations Conference on Environment and Development (UNCED) – also known as the Rio de Janeiro Earth Summit – in1992. This year also witnessed the debut of Sustainable Development concept in an institutional way and the endorsement of the 21st  century agenda.

The concept of sustainable development was upgraded with the launch of the Millennium Development Goals (MDGs) in September 2000. The MDGs were planned to be accomplished by 2015.

Enormous progress was made towards achieving the Millennium Development Goals. At the September 2010 MDG Summit, UN Member States initiated steps towards advancing the development agenda beyond 2015. The then UN Secretary-General Ban Ki-moon announced the 27 members of a High-level Panel to advise on the global development framework beyond 2015. Moreover, a call was set off to form an international governmental teamwork to draw up proposals on ways of achieving sustainable development.

In 2013, the UN General Assembly established a 30-member Open Working Group to develop proposals on means of achieving sustainable development.

In September 2015, the 17 United Nations Sustainable Development Goals were endorsed. Moreover, the Paris Agreement on Climate Change was clinched in December 2015.

Egypt was among the first states to call for launching an institutional framework for sustainable development at the national level. Egypt drew up a purely national strategy and backed multilateral international agreements, especially through offering technical assistance.

Egypt filed its first national report on the progress realized so far in accomplishing the UN Sustainable Development Goals during the High-level Political Forum which was held at the UN HQ in New York in July 2018. This coincided with Egypt’s chairmanship of the Group 77 and China which was the largest and most important group of developing countries inside the United Nations.

The Egyptian permanent delegate to the United Nations shouldered the responsibility of representing 134 developing countries in negotiations concerning various development and economic issues on the UN agenda.

Egypt also took part in all initiatives and efforts meant to realize sustainable development in addition to participating in several relevant events, including the 2019 Forum on Informal Economy and Sustainable Development which was held in tandem with the African Union as well as a gathering on inequality and the role of international organizations in tandem with the United Nations Development Program and the World Food Program.

The Egyptian government started forging its future vision “Egypt Vision 2030” in accordance with the 17 UN Sustainable Development Goals and launched a program to support the implementation of this vision to realize tangible economic progress.

Egypt adopted this vision as a general framework for improving the quality of people’s lives and welfare, taking into consideration the rights of new generations in a prosperous life; thus, this strategy depended on three main dimensions; economic, social, and environmental dimensions.

Planning Minister Hala El Saeed shouldered the responsibility of drawing up Egypt Vision 2030 and developing it to be a roadmap for magnifying the benefit of available potentials, boosting competitiveness, securing dignified life for people and reviving Egypt’s historic role as regional leader.

The strategy was the first in Africa to depend on national goals to accomplish the UN Sustainable Development Goals.

The strategy was worked out in tandem with representatives from civil society organizations, private sector, various ministries, experts and academicians as well as international organizations, including the International Labor Organization, the UN Population Fund, the UN Women, the World Bank and the USAID.

Egypt Vision 2030 became the guide for the Egyptian government. Amid accelerating international changes and economic trends, it was necessary to turn this vision into an all-out strategy comprising development programs and projects that would realize sustainable growth in line with the Egyptian government needs. The strategy had assessment and follow-up indicators to ensure its implementation on the ground.

The Egypt 2030 strategy is a national charter which aims to ensure the optimal use of resources and good governance to achieve the aspired economic growth that will cast its shadow on the living conditions and welfare of the Egyptian people and place Egypt in its pioneering position on the world map. 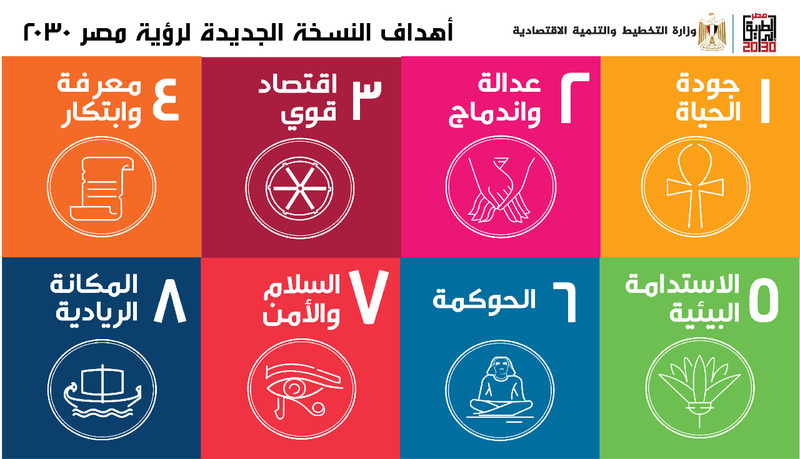 The second national goal on justice and social inclusion goes in harmony with the UN goals on better education and gender equality.

The fifth national goal on a comprehensive environmental and sustainable system caters for the UN goals on securing clean water and clean energy at affordable prices as well as taking climate action.

The sixth goal was good governance of state institutions and societies in line with the UN goals on establishing powerful institutions.

The seventh goal on the Egyptian peace and security goes in line with the UN goals on realizing peace and justice.

The eighth goal meets the UN goal on promoting partnerships that would help attaining sustainable development.

The past five years witnessed great development which was manifested in figures. The Egyptian government accomplished many national projects to give momentum to national economy. It launched a large number of social protection programs to improve the quality of life of the Egyptian people in addition to the unprecedented interest in giving due attention to the environmental dimension, especially the impact of projects on the environment in line with three  development dimensions ( social, economic and environmental dimensions).

Egypt launched a numerous number of projects in line with the sustainable development goals. These projects included the establishment of the new Suez Canal, which aimed to reduce the transit time of ships and achieve more profits.

The government also spearheaded the New Administrative Capital project. The new capital – 35 KM east of Cairo – is meant to give momentum to the Egyptian economy through incentivizing development projects. The 170, 000-feddan capital is a different type of urban community that will be smart, safe, sustainable and eco-friendly. The city will be integrated with designs of buildings, neighborhoods, and landscape. To ensure air quality, the city will be equipped with air pollution sensors, while featuring a green river, an unprecedented green space in Egypt. The city is also planned to be a high-tech hub via having the country’s first technological knowledge city, similar to Smart Village, to host research, innovation, and entrepreneurship centers in the fields of advanced digital technologies, like the internet of things, artificial intelligence, embedded systems, and electronic designs. Therefore, the new capital is incomparable.

Moreover, the Egyptian government has been keen to realize food security, therefore it gave the go-ahead to the largest fish farm in the Middle East; namely the “Ghalyoun fish farm” project in Kafr El Sheikh on the Mediterranean Sea. This project secured more than 5,000 job opportunities.

Meanwhile, the Armed Forces Engineering Authority and the Arab Contractors Company joined forces to set up Rod El-Farag axis, the largest cable-stayed bridge in the world, according to Genius Records. The bridge helps to ease traffic congestion in the capital Cairo.

Egypt also took significant steps in the field of energy, with the establishment of different massive clean and renewable power stations, topped by the 2,000-gigawatt solar energy plant in Benban which will be the largest in the world. Besides, the discovery of Zohr Gas Field allowed Egypt to gain its economic and geographical importance in the region.