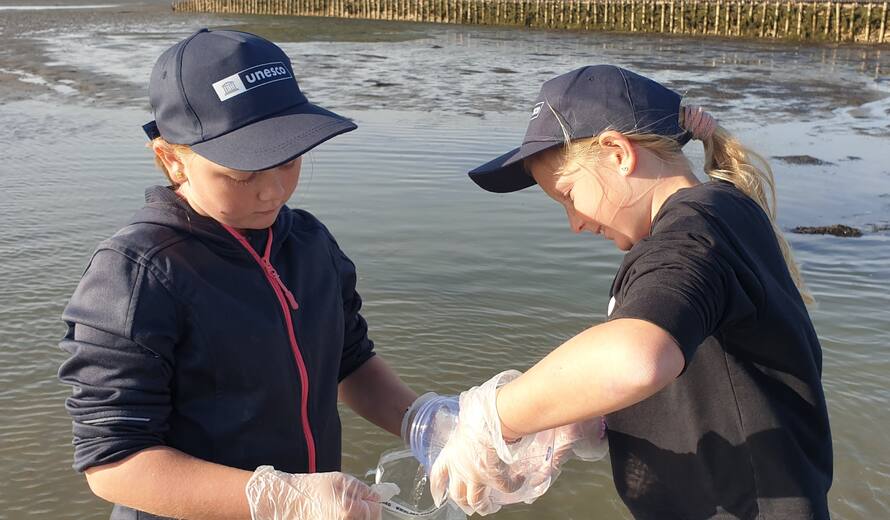 Ocean species shed DNA into the water around them in the form of genetic material from waste, mucus or cells. Just one liter of water can determine the biodiversity richness in a given area and may contain hundreds of species.

The Wadden Sea is the first of 25 UNESCO World Heritage marine sites where eDNA sampling campaigns are being rolled out between September 2022 and April 2023.

“This is an innovative approach that we are honored to be part of”, says Bernard Baerends, Executive Secretary of the Common Wadden Sea Secretariat. “As one Wadden Sea, we work together to support the eDNA expeditions initiative, and thereby the global network, sharing a snapshot of marine life in our World Heritage site. The citizen science approach is an ideal opportunity to inspire and educate the next generation of ocean scientists.”

Environmental DNA is an innovative science method that can be used in monitoring and evaluating ocean biodiversity without the need to actually extract organisms from their environment. The scientific results are expected to provide a one-off biodiversity snapshot across marine World Heritage sites, and for fish species particularly. Combined with IPCC heat scenario projections, the initiative will help inform potential geographic and distribution shifts of fish species as a result of climate change.

The initiative is a joint collaboration between UNESCO’s Intergovernmental Oceanographic Commission and the World Heritage Center, and is made possible through the support of the Government of Flanders (Belgium).  The results are expected end 2023 and will be publicly available on the world’s largest open source Ocean Biodiversity Information System (OBIS). The initiative marks the first global action for marine World Heritage under the United Nations Decade of Ocean Science for Sustainable Development (2021-2030).