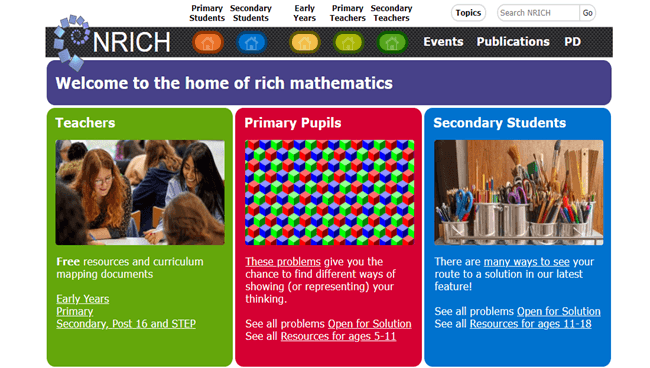 Over 3.5 million users across 230 countries and territories worldwide accessed the Cambridge University’s NRICH maths project – which provides thousands of free online mathematics resources for ages 3 to 18 – during the coronavirus lockdown from March to September.

In the UK alone, a record of over 1.5 million UK users logged in NRICH during the aforementioned six months.

Ems Lord, Director of NRICH, said “The NRICH maths project – which provides thousands of free online mathematics resources for ages 3 to 18 – saw a 94.87% year-on-year rise in website visits from the UK between March and September, with up to 724,758 page views each week.

A team of the university’s faculties of Mathematics and Education, responded quickly when it became clear that schools would be closing as part of the lockdown, working to tailor the website for pupils working from home and uploading resources they thought would benefit them – and their parents.

“We totally pivoted,” said Dr Lord. “We put everything else we were doing on hold and sat down as a team and worked out what categories we needed to fill. We went through our files and found all the stuff we thought would be good to do at home. Activities you could print off and resources you could use online.”

And while they were preparing the maths games and problems, the team also considered the new learning environment pupils found themselves in and created a selection of resources that utilized things found around the house, such as buttons, scraps of paper, and even toy bricks that could be used as counters.

“We created a selection of resources so you didn’t need your metre stick or your plastic cubes, and we tried to make it as family friendly as possible,” said Dr Lord. “We also rejigged our homepage for people coming to it for the first time – we put a bright yellow banner across the page that says ‘Maths at Home’, so you couldn’t miss it.”

“We opened for business as normal and we immediately had a huge number of hits. We were already reaching millions of people worldwide, but when your visitor numbers go up by that much overnight it’s a shock. We increased our capacity for welcoming visits to the site at lunchtime that day, and since then it’s been going smoothly. We’ve been refining it and adding stuff as we go along. The impact has been fantastic.”

The team also provided resources to BBC Bitesize and the Department for Education, as they continued to support families directly through the NRICH website. Key to the success of the new content was making sure parents and carers felt confident so that they could help the children with their learning if needed.

“It’s very different working with families and explaining things to parents who are home-tutoring for the first time,” said Dr Lord. “The resources include ‘teacher notes’, explaining how to introduce the activity and what to look for, and that was ideal for parents who were new to a particular maths topic, or might even have grown up having nightmares about maths! We normally invite pupils to send in their solutions and ideas, we have those on the site, so if you’re a parent who’s not used to teaching maths, or a child working on their own, the answers are all there, with explanations.

“Most of the people on the team had family members who were at home, and so they could really think ‘this is what someone else at home will need’. We’re very aware that if a school is closed and you’re doing maths at home, it’s very easy to fall into the trap of just practicing times tables, number facts, following procedures and not actually doing engaging maths. And I think that’s why it went down so well – it had flexibility.”
And the support doesn’t end now students are back in the classroom. The NRICH team is busy supplementing Government resources to address the ongoing impact of COVID-19.

“There’s obviously a need to fill any gaps that have been left as a result of the pandemic and the pupils’ disrupted learning, but there is also concern about classrooms turning into ‘hothouses’, where lessons are solely focused on procedural work. So for every key topic, where we can, we’re providing enrichment activities and problem-solving resources, so pupils can also develop and experiment with maths. It’s gone down very well with teachers.

“It’s been a lot of work, but it’s a fantastic team, and mathematicians love a challenge. We want to make sure children are still having that high quality experience, including children who for whatever reason are still missing school. We’re part of the University of Cambridge, and what we would very much like to do is make sure all children have a great diet of maths, and have that understanding of why it’s important. We want to address that national issue we have of ‘I’m no good at maths’. That’s where we’re coming from.”