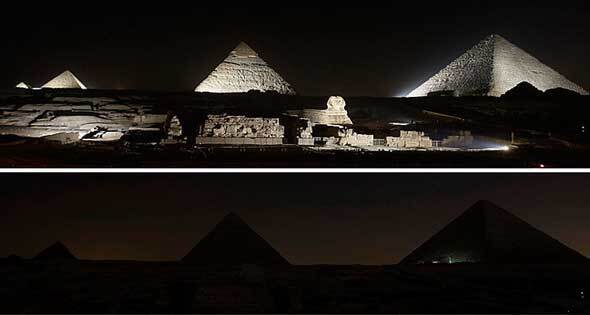 The coronavirus pandemic has taught the world a lesson about the importance of adopting eco-friendly attitudes to save the planet. Millions of people around the world decided to join this drive by making the 2021 Earth Hour hashtags top trend on social media.

Earth Hour and related hashtags trended across 42 countries on Twitter or Google search, and 1.2 billion social views came from TikTok alone with Earth Hour trending in most regions.

Earth Hour Virtual Spotlight video, highlighting the link between nature loss and pandemics, had at least 2.4 million views in 24 hours, making it the most watched video in Earth Hour history.

The Earth Hour initiative was launched in Sydney in 2007 to encourage people around the world to switch off their lights to call attention to climate change.

More than a decade later, the climate crisis remained and was made worse by another urgent threat; namely the rapid loss of biodiversity and nature.

Natural systems are vital – and yet, the rate of global loss of nature during the past 50 years is unprecedented in human history. Nature not only provides food, water, clean air, and other services worth over $125 trillion a year – it is also one of the strongest allies against climate change. Protecting nature is one of the most immediate, powerful, and cost-effective solutions to the climate crisis.

Earth Hour – which is organized annually by the World Wide Fund for Nature – aims to increase awareness and spark global conversations on protecting nature not only to combat the climate crisis, but to ensure people’s own health, happiness, prosperity and even survival.

How Egypt and other Arab countries marked Earth Hour?

Egypt has been at the forefront of Arab countries taking part in this vital global event as it joined the Earth Hour initiative in 2009.

Egypt turned off lights of the Giza Pyramids and other archaeological sites, including Salah Eddin Citadel, Cairo’s famous Mosques of Sultan Hassan and Al Rifa’, the palaces of Baron and Aisha Fahmy, Qaitbay Citadel in Alexandria and Sharm El Sheikh Museum.

The UAE has been also one of major Arab countries participating in this global event with buildings nationwide.

Dubai’s Burj Khalifa, the world’s tallest building, marked the event along with other attractions, including Yas Theme Parks and CLYMB Abu Dhabi on Yas Island and Sheikh Zayed Grand Mosque.

Saudi Arabia has also turned off lights in various parts of the kingdom. Kuwait contributed to this event by using candles to light the Grand Mosque of Kuwait. This was meant to encourage reducing energy consumption and greenhouse gas emissions.

Qatar also took part in the event with turning off lights of the Museum of Islamic Art.

There were major contributions to this event by many world cities, including London, Paris, etc.

In London, the Houses of Parliament, London Eye, Shard skyscraper and neon signs of Piccadilly Circus were among the landmarks flicking the switches.

In Paris, the three stages of the Eiffel Tower progressively went dark, while in Rome, the lights went out at the 2,000-year-old Colosseum.

Global leaders, celebrities, individuals, youth groups and businesses from a record-breaking 192 countries and territories came together on March 27 to lend their support for the planet.

United Nations Secretary-General Antonio Guterres, Pope Francis and European Commission President Ursula von der Leyen were among the many influential leaders and celebrities who supported Earth Hour 2021, to draw attention to the nature and climate crises.