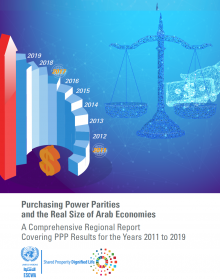 The United Nations Economic and Social Commission for Western Asia (ESCWA) said Egypt ranked as the second largest Arab economy as per  the purchasing power parities and the number 1 as the least expensive country.

This came in ESCWA’s recent regional report entitled “Purchasing Power Parities (PPP) and the Real Size of Arab Economies” which presents the largest and most recent annual PPP time series covering 2011 to 2019.

A total of 12 Arab countries participated in the latest  global round of the International Comparison Program (ICP) round under ESCWA leadership, namely Bahrain, Egypt, Iraq, Jordan, Kuwait, Morocco, Oman, Qatar, Saudi Arabia, the State of Palestine, the Sudan and the United Arab Emirates.

Egypt replaces the United Arab Emirates as the second biggest economy when measured in real PPP terms, in contrast to the reverse ranking reflected through exchange rate conversions.

PPPs are highly valued not only for their increased uses in comparative economic analysis and welfare estimations, but also for monitoring progress towards the achievement of the Sustainable Development Goals (SDGs) and The 2030 Agenda for Sustainable Development. PPPs enter into the computations of indicators pertaining to targets under eight SDGs, namely SDG 1, no poverty; SDG 2, zero hunger; SDG 3, good health and well-being; SDG 4, quality education; SDG 7, affordable and clean energy; SDG 8, decent work and economic growth; SDG 9, industry, innovation and infrastructure; and SDG 10, reduced inequalities. Sizes of economies are better compared when measured in real PPP terms.

Price level differences are noticeable between Arab countries. In general, Gulf Cooperation Council (GCC) countries are more expensive. One notable exception is the State of Palestine, which is one of the most expensive countries in the region, along with Kuwait, Qatar and the United Arab Emirates. At the other end of the spectrum, Egypt and the Sudan are the least expensive of the 12 ICP-participating Arab countries.

At the global level, when comparing with world economies in 2017, Egypt ranked least expensive followed by the Sudan in third place. Sizes of economies are better compared when measured in real PPP terms. Observing the group of 12 Arab countries that the present report focuses on and which constitute around 84 percent of the economy of the Arab region, Saudi Arabia leads the group as the biggest economy across the years in both real and nominal terms.

The ESCWA report sets out the results of the ICP for the Arab region for the years 2011-2019, along with analysis of major results and key findings. It includes an introduction of ICP, its outputs and their importance, and tables of ICP results from a global perspective for the years 2011-2017 and from a regional perspective for the years 2011-2019. ICP is one of the biggest global statistical initiatives worldwide. Since its inception, it has gone through different stages, developing from a small project to a permanent statistical work program conducted regularly. ICP provides comparable price and volume measures of gross domestic product (GDP) and its aggregates between countries and regions.

Purchasing power parities (PPPs) are the main output of ICP. They convert different currencies into a common currency, while equalizing their purchasing power by eliminating price level differences, thus showing the real purchasing power of each currency and allowing for reliable cross-country comparisons. The Economic and Social Commission for Western Asia (ESCWA) is the implementing agency of ICP in the Arab region. It supervises and guides its member States in implementing ICP-related activities and is responsible for computing PPPs and other ICP outputs for the region.