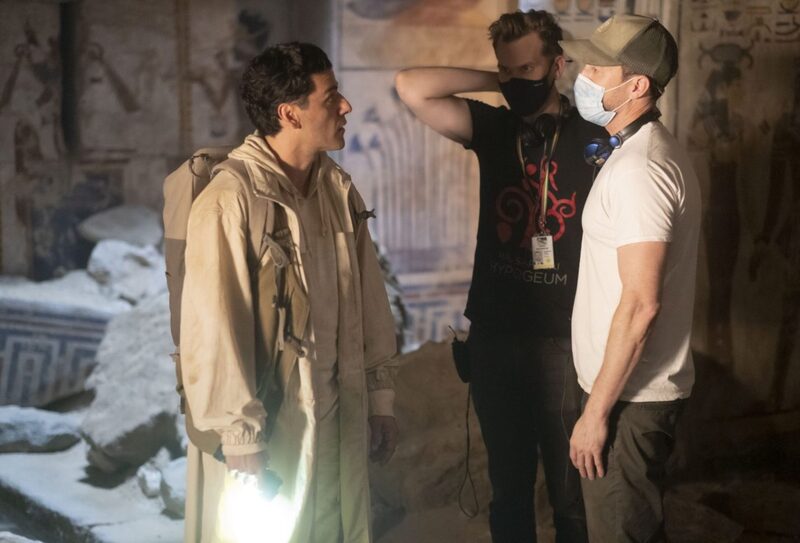 Marvel Studios’ Moon Knight, on Disney+, also had a dedicated sustainability department that was able to make lasting change by elevating awareness of sustainability and environmentally-friendly filmmaking and by introducing new sustainable production practices in the locations where it filmed.

The Sustainability Department was led by local consultant Green Eyes Production, which served as the show’s environmental steward, and had three dedicated Eco Production Assistants (PAs).

The department looked at every aspect of filmmaking and, thanks to its efforts and the support of the crew, the show was able to reduce its environmental impact significantly by instituting innovative recycling and composting programs, using new technologies to reduce fuel use and emissions, and asking vendors to source sustainable alternatives to commonly used products.

One of the production’s most significant achievements was eliminating single-use plastics in catering by switching to compostable to-go containers and cutlery and finding composting vendors who could accept them.

Because of COVID-related safety protocols, reusable dishes could not be used. Used containers were collected and transported to a local industrial composting facility where they were processed and turned into fertilizer, keeping materials out of landfills and incinerators and generating nearly 10 metric tons of fertilizer.

Another step taken by the department was introducing a more centralized waste management system throughout the shoot.

They created a pop-up “waste garden” at the studio, where recyclables and all other waste streams were collected and sorted by a local company that provides training and jobs to people transitioning from homelessness. This helped the production maximize the amount of material that could be recycled or reused instead of being sent to the incinerator plant, supported local job training, and even saved money as well.

Altogether, the efforts to reduce waste resulted in 23 metric tons of materials being diverted from landfills and incinerators.

The production faced challenges in energy management and fuel use, as alternatives were limited in the show’s Eastern Europe filming locations.

The Sustainability Department, however, worked to find creative ways to reduce the amount of fuel the production would otherwise have used, including by bringing in battery-powered electric generators from the UK and training the crew in their use.

Completely silent and emission-free, the battery generators were a hit with crew and reduced the dependence on diesel fuel while filming on location.

The Sustainability Department had a great partner in the studio facilities where they filmed. The studio uses recycled heat from a nearby incineration plant, reducing the need for natural gas. And, in addition to giving the production space for the waste garden, on Birds and Trees Day, the studio let the production plant a symbolic cherry tree with compost generated by the production’s own waste.

The studio has now also stocked battery electric generators so that they’re available for future productions in the region.

Other sustainability initiatives and efforts on Moon Knight include donating 50 large Nile palm trees and other green plants to a zoo and local hospitals in addition to collecting used cooking oil and kitchen waste to be processed and turned into biogas or given to farm animals, rather than sending it to landfill.

The department also reduced the use of single-use plastics by having a ‘Bring Your Own Bottle’ policy in place. Those who had none at home received a foldable bottle to use on set.

The plastic waste was also reduced by placing sensor-operated and pedal-operated water dispensers in offices, workshops, and on set so reusable bottles could be safely refilled.

The initiatives also included sending frequent environmental newsletters to the crew, keeping them up to date on the result of their efforts, with games included to educate and inspire action.

The department also used bamboo paper towels and toilet paper in trailers and Utilized LEDs for 70% of set lighting.

The sustainability efforts on Moon Knight have had far-reach results that will also benefit future productions in the area. Disney is continuing to work to ensure all its productions are being created in an environmentally responsible manner and to help the entire entertainment industry make progress in addressing its collective impacts.