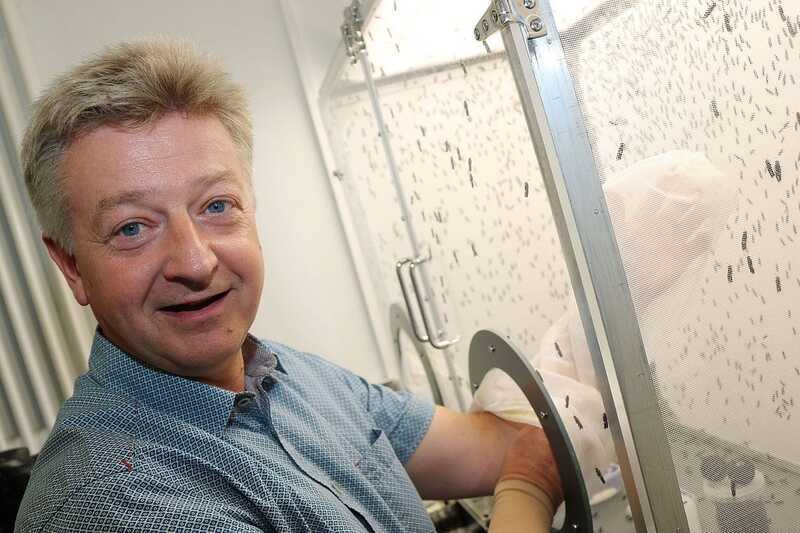 By Marwa Nassar - -
Scientists said insects could play an important role in providing animal feed in the future as the climate change is posing a challenge for catering for the increasing demand for feed and food due to the growing world population. Insects – which are able to recycle residual materials and waste that cannot be used by humans – can also be a source of valuable and environmentally friendly protein suppliers.

Scientists at the Leibniz Institute for Farm Animal Biology Dummerstorf (FBN) have expanded their range of farmed animals to include insects. The aim is to investigate the up to two-centimeter-long black soldier fly and its protein-rich larvae as an alternative high-quality protein source.

The increasing demand for feed and food due to the growing world population is in a conflict with the necessary restrictions of climate change. This imposes growing demands on the sustainable production of feed and food.

In a warm, humid, air-conditioned room with special lighting, a colony of soldier flies lives, which has just begun to lay their eggs. ” In this way we create optimal climatic conditions for the flies and their larvae and can investigate in detail not only the utilization of residual substances as nutrient substrates for the larvae, but also the genetic basis,” emphasized Professor Dr. Cornelia C. Metges, head of the Institute of Nutrition Physiology “Oskar Kellner” at the FBN. “In cooperation with the FBN-Institutes of Genomics, Reproductive Biology and Muscle Biology and European partners such as the University of Exeter in the UK, we want to learn as much as possible about insects as valuable and environmentally friendly protein suppliers of the future”.

At present, a large proportion of the necessary protein for the feed of farm animals in European agriculture is covered by imports. “We are closing the protein gap in European livestock farming by importing soya and fish meal. Local plant alternatives such as lupins and peas have so far only been able to establish themselves as niche products. In this respect, enormous expectations worldwide rest on a contribution from insects, in particular flour worms, grasshoppers and soldier flies,” says the agricultural scientist.

“A generation cycle takes about six weeks,” explained the biologist PD Dr. Manfred Mielenz. “The fly goes through five developmental phases, from egg, larvae and prepupae to pupae and adults. We can produce 100 kilograms of larvae from a few grams of eggs. This is an unparalleled efficiency. A larva weighs an average of 140 milligrams and consists mainly of protein and fats”.

The larvae hatch about four days after eggs have been laid and are then grown on nutrient substrate. This can contain otherwise unusable by-products of the food industry, such as fermentation residues from beer brewing, kitchen waste or harvest residues, and thus contribute to the completion of nutrient cycles. “Animal feed from larvae will be of great interest in the future, particularly in pig and poultry farming,” explained Prof. Cornelia C. Metges.

Larvae have long been established in the nutrition of pets such as dogs, cats and reptiles as well as aquarium and breeding fish. However, there are still some gaps in our knowledge for the future use of larvae as a source of feed for farm animals, also EU legal requirements are still missing.

At the “Open Day” on Saturday, 21 September 2019 at the Leibniz Institute for Animal Biology (FBN) and at the Landesforschungsanstalt für Landwirtschaft und Fischerei MV (LFA), scientists will report on their new flying protégés and give an insight into the future of soldier flies as “climate protectors”.

Unilever is using a new technology to create the first-ever paper-based laundry detergent bottle, made ...

The International Olympic Committee (IOC) announced it would fund a 355,000-tree “Olympic Forest” to be planted ...