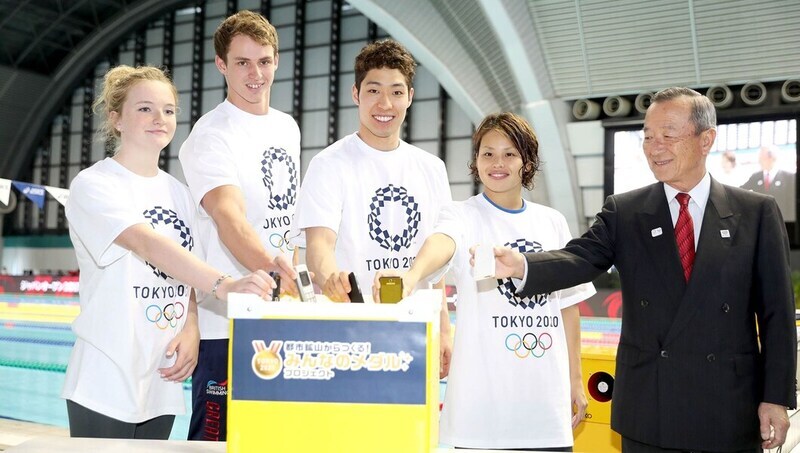 The Tokyo Olympics 2020 decided to be a platform for encouraging the world to move ahead towards sustainability and circular economy.

“The Games are one of the world’s most widely televised events, and they offer an excellent chance to demonstrate sustainable solutions,” says Marie Sallois, IOC Director for Corporate and Sustainable Development. “With its emphasis on the circular economy and sustainability, Tokyo 2020 is setting an example to the world of what can be achieved now and in the future.”

For the first time ever, both the Olympic medals and the podiums which athletes stand on have been produced using 100% recycled materials.

In order to make the 5,000 gold, silver and bronze Tokyo 2020 medals, precious metals were extracted from small electronic devices contributed by people all over Japan.

Japanese citizens also donated plastic waste for the production of the Tokyo 2020 podiums, part of an initiative with Worldwide Olympic Partner P&G.

The Olympic torch was also produced using aluminium from temporary housing built in the aftermath of the 2011 Great East Japan Earthquake. 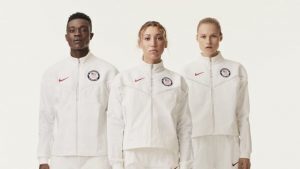 Moreover, the uniform of the Olympic torchbearers was made of recycled plastic bottles collected by Coca-Cola.

Also, sportswear brand Nike used recycled polyester made from plastic bottles and recycled nylon as well as rubber and yarn waste from the company’s factories to create these uniforms.

Nike made uniforms for soccer jerseys for the American, Korean and Nigerian teams, alongside kits for the US’ men and women basketball teams.

Also, bright-colored skateboarding uniforms that Nike has designed for the first skateboarding competitors at the Olympic Games were fully recycled.

According to Nike, all of the skateboarding jerseys are made up of 100 percent recycled polyester from “water bottles and other things that would go to waste”.

The sportswear company has created uniforms for the United States, France and Brazil.

Nile said the uniforms were the “most sustainable” and “highest performing” to date.

Sustainability at forefront of Tokyo Olympics:

Sustainability has been at the forefront of the Tokyo Olympic Games to tackle the global environmental challenges that the world is facing.

The Olympic Games were also looking to reduce the footprint of the Games themselves and use their visibility to promote a more sustainable way of life.

“Climate change affects everybody on this planet,” said Tokyo 2020 Senior Director for Sustainability Yuki Arata. “As a major global event, the Olympic Games have a responsibility to reduce emissions and be a catalyst for sustainable development.”

Tokyo 2020 has pledged net zero carbon emissions, which many see as an opportunity to accelerate the city’s transition to a more sustainable future. 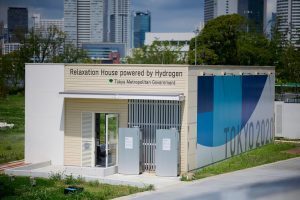 A hydrogen station in Harumi, where the Olympic Village is located, has been used to power homes and cars alike. And where it has not been possible to procure renewable energy, Tokyo 2020 is using green power certificates to compensate for the use of non-renewable electricity.

The Olympic Village has been home to thousands of athletes for several weeks.

After the Games, underground pipes will take hydrogen from a production station to residential blocks. Organizers hope the Olympic Village, as Japan’s first full-scale hydrogen infrastructure, will leave an impression on future generations. 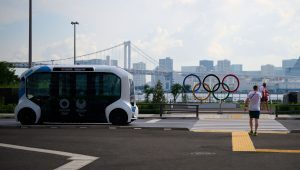 The autonomous and electric e-Palette vehicle was designed to transport Olympic and Paralympic athletes around the Olympic Village without generating emissions.

Some of the modifications include widening the doors, lowering the flor and adding electric ramps to enable passengers – particularly wheelchair users – to board easily and quickly.

A final calculation on emissions will be made after the Games, and will be included in the Tokyo 2020 post-Games sustainability report.

As the whole world is keeping an eye on the Olympics, sustainability and circular economy are figuring high for generations to cherish them in order to save the planet.