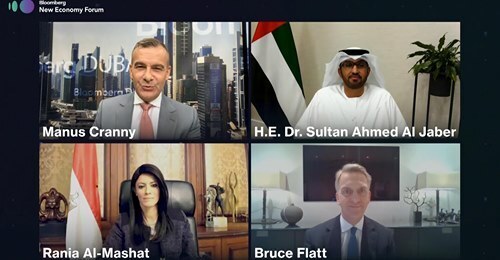 The Bloomberg New Economy Forum selected Egypt and the United Arab Emirates (UAE) as regional champions for rising economies to spell out their stories of success after the coronavirus pandemic crisis.

The Bloomberg New Economy Forum – a major global gathering of business and political leaders – sheds light on investment opportunities in rising regional economies that are playing an increasingly important role.

Participants of the Bloomberg forum included a line-up of prominent speakers such as Christine Lagarde, forum Honorary Chair Dr. Henry Kissinger, and Co-Chair Henry Paulson, Jr, as well as Prime Minister Lee Hsien Loong and many others.

During the forum’s plenary session “The Rise of Regional Champions: The Search of Resilience,” Egyptian International Cooperation Minister Rania El Mashat highlighted the state development efforts manifested in partnerships with the private sector, the economic reform program and multilateral cooperation in order to attain sustainable development.

Today, emerging economies in Africa, Asia and the Middle East are disrupting the narrative and creating their own stories of resilience, growth and development.

Mashat affirmed that 2021 is a ‘critical year’ for regional economies to champion green, sustainable and inclusive growth.

She expounded that Egypt managed to confront the coronavirus crisis with action policies depending on transparency alongside the powerful economic reform program.

This enabled Egypt to boost its hard currency reserves and this has contributed to alleviating the impact of the crisis and maintaining positive economic growth rates.

The approval of the $ 5.2 bn standby loan from the IMF during the crisis is a signal to investors that policymakers have not lost sight of the long-term reform goal, she said, adding that investments in education and digital infrastructure enabled the country to “breeze through” the lockdown period.

Egypt’s story of resilience was echoed during the EBRD and World Bank Annual Meetings; where Egypt was singled out as the only country in the region with positive growth rates of 2% in 2020 and expectations of positive growth rates in 2021 with 5% – supported partly by infrastructure and a boom in the telecommunications sector through public-private partnerships.

Egypt will continue to attract investors in the post-COVID-19 stage, she said, noting that Egypt was positioned to be among the handful of countries due to avoid recession this year with large underway infrastructure investment programs.

Mashat underscored that governments cannot stand alone in facing this crisis and must include the participation of international institutions, the private sector, and an empowered civil society.

“I call the years 2020-2021 ‘Years of Multilateralism’; no country or region can stay in isolation and this is the role of international cooperation,” she added.

Mashat reiterated that Egypt’s Ministry of International Cooperation – through a portfolio of $ 25 billion, is shifting mindsets through ‘Economic Diplomacy’ with three key principles; Multi-Stakeholder Platforms, Official Development Assistance (ODA) Sustainable Development Goals Mapping Framework, and the Global Partnerships Narrative (People at the Core & Projects in Action and Purpose as the Driver).

The minister referred to transforming projects into success stories for the region, especially Egypt’s turning to a hub for energy production in addition to connecting the electricity grid with the Mediterranean and Africa.

Egypt has also built the world’s largest solar park in  Benban in the Aswan Governorate, About 13 private sector companies take part in the project which employs more than 10,000 people, houses 32 power plants and is expected to avoid 2 million tons of greenhouse gas emissions a year, the equivalent of taking about 400,000 cars off the road.